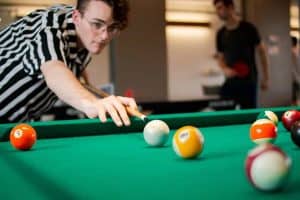 When shopping for a pool table, make sure you pick the right one for your room or hall. Usually, game rooms contain obstructions.

The obstructions may come in the form of furniture or fireplaces. These items tend to hamper players’ movements during games.

What is the Standard Pool Table Size?

These are great for use in clubs, pubs, and tournaments all over Britain and the United States.

The Game Of Pool

The game of pool is widespread across the world. Millions of people engage in it. The game comes in varieties. Each distinct game has its set of rules and regulations which guide it.

The most popular has its origin in the USA. In the USA, it is called ‘eight-ball’ and ‘nine-ball’ pool.

The pool game is a reasonably high-speed game when compared with snooker and billiards. Also, it demands a great deal of skill on the part of the players. The game involves players’ concentration and critical thinking too.

The Object Of The Game Of Pool

In the game of pool, players strive to pot their balls. The balls are either stripes or solids. A player who successfully pots his eight balls wins the game. Pool games usually comprise many games. Also, the games are in a “best out of” form.

So, players try to win as many times as possible. The more wins a player has, the closer he gets to win a particular match. To win, a player must involve his skills. The skills come in the form of attack as well as safe play.

Playing the game of pool also involves the use of tactics. The combination of these helps a player to win a game or match.

First is the pool table. The table usually measures about 9 feet by 4.5 feet.

Sometimes, players use other table sizes. They use a total of 16 balls. These include a white cue ball and seven solid balls. Also, there are seven striped balls and one black ball.

Each player uses a cue. Players strike the cue ball with it. Also, cues consist of fiberglass, carbon fiber, or wood. Besides these, players chalk the end of their cue.

Using the chalk guarantees perfect contact between the ball and cue. The chalk helps players to have better control over their shots.

At the invention of the English pool, only one pool table size existed. It was far back in the early ’70s. The earliest pool tables were in the UK’s pubs. However, before this, players used the American’s larger tables.

One challenge with this arrangement was that the rooms could not perfectly accommodate the tables. Another issue was the ball size. American pool tables employ the use of 21/4 inch balls. The tables also came with bigger pockets.

The UK cue games fans had been enjoying the skill elements attached to snooker. So, this new game was not yet popular with them.

The 7 feet pool tables came with a ball similar in pocket ratio to snooker. Also, they used woolen napped clothes often found on snooker tables. They substituted this for the speed cloth material used with American models.

As a result, players enjoyed a higher level of skill. It also brought a solution to the issue of space encountered by many pubs. Soon after, the UK pool came into existence. Hence, the demand for appropriate pool tables soared. Pubs in the country wanted a table to serve their customers’ needs.

The use of the 7 feet UK made pool tables was a relief. However, many pubs still consider it too large for their rooms. This challenge faced by the majority of pubs brought about the production of the 6 feet by 3’6 tables.

This new set of pool tables provides an adequate play surface. As a result, players can still enjoy their game of pool. To date, many pubs and clubs still have the 7 feet table. However, the 6 feet pool table is quite popular.

It is not quite easy to pick the most popular among these two. Both pools are great. Each provides players with excellent game time. The 7 feet pool table, however, requires a bit of a higher skill level.

When we mention the 7 feet UK table, our focus is on the overall cabinet dimension. Its dimensions are 7 feet by 4 feet.

The UK game of pool

In the United Kingdom, the game of pool is not widely accepted. Smaller balls were suited for the British, who love venturing into pubs. Their pubs do not have enough spaces too. So, the tables and ball sizes conform to their pub space.

In other countries, however, the use of the smaller table was not necessary. They do not experience constraints on space like the British.

The pioneer of the UK pool game table is Hazel Grove. He was able to make huge sales of his pool tables. As a result, he opened factories in Spain and France. The game of pool still blooms in France, Spain, Morocco, and other nations.

The American vs. UK Pool tables

Many people wish to know the disparities between the American and UK pool tables. Others wonder whether the two tables are for different games. Indeed, the two models of pool tables are different.

Another distinct feature of the English pool table is its pockets. The pockets have curved pocket entrances. Curved pockets offer specific challenges to players. It is not so easy to pot balls into the pockets. However, it is easier to get shots into the two center pockets.

The English pool table cloth comes with a particular texture. The material feels fuzzy when touched. The function of this material is to slow down ball speed.

The American tables have unique pockets and cushions. Their unique style gives the pockets a ‘sharp’ look. Also, their cushion rubbers have a triangular shape. The cushion effectively allows balls to bounce off it.

Corner pockets are more comfortable for shooting. Their entry cuts straight, and the side pockets are much tighter.

The material used on American pool tables is different. The cloth’s texture is similar to cotton. It has no nap, and one can easily see its base weave. Since the fabric is smooth, it allows balls to move faster on the table.

Manufacturers of tables began to construct home pool tables in the 80s. One of the challenges faced was getting adequate space for the tables. Most of the British houses were smaller.

The availability of the smaller size pool tables helped to solve this problem. UK homeowners were glad to duplicate the game in their homes. Before this time, they only played the game in bars.

Over the years, the market for pool tables keeps rising. The issue came up due to the decline in the number of popular pubs. Also, the cost of hanging out at night was an issue. More individuals now embrace staying at home. While at home, they can still enjoy their game of pool.

Having a pool hall or room in the home also has another advantage. People have been able to create entertainment right in the house. The presence of the pool game plays a vital role in this aspect.

Manufacturers experienced another leading development. The development was the production of the pool dining table.

The pool dining table serves a dual purpose. It could function as a dining table. Also, people play the game of pool on it. As such, individuals do not need a separate dining room and a game room. All they do is to make the conversion as needed.

Factors To Consider When Buying A Pool Table

The first thing you should note is that both the 6ft and 7ft tables provide great enjoyment. Players get a high dose of the skillful game in both sizes. Note that the 6ft pool size table does not require a larger room area.

If you have enough space, it is best to go for the 7ft table. However, do not try to squeeze it into your limited space. If you still wish to get the 7ft table, you can go ahead. All you need to do is to use shorter cues. Using shorter cues gets you space to move around while playing.

You have the choice to make, whether to purchase the 6ft or 7ft pool table. Before making your purchase, carry out some activities. Get the measurement of the room where you would place the table. You may use a dummy outline of the table size in the room.

Doing the activities mentioned will ensure you get the table size appropriate for your room area. 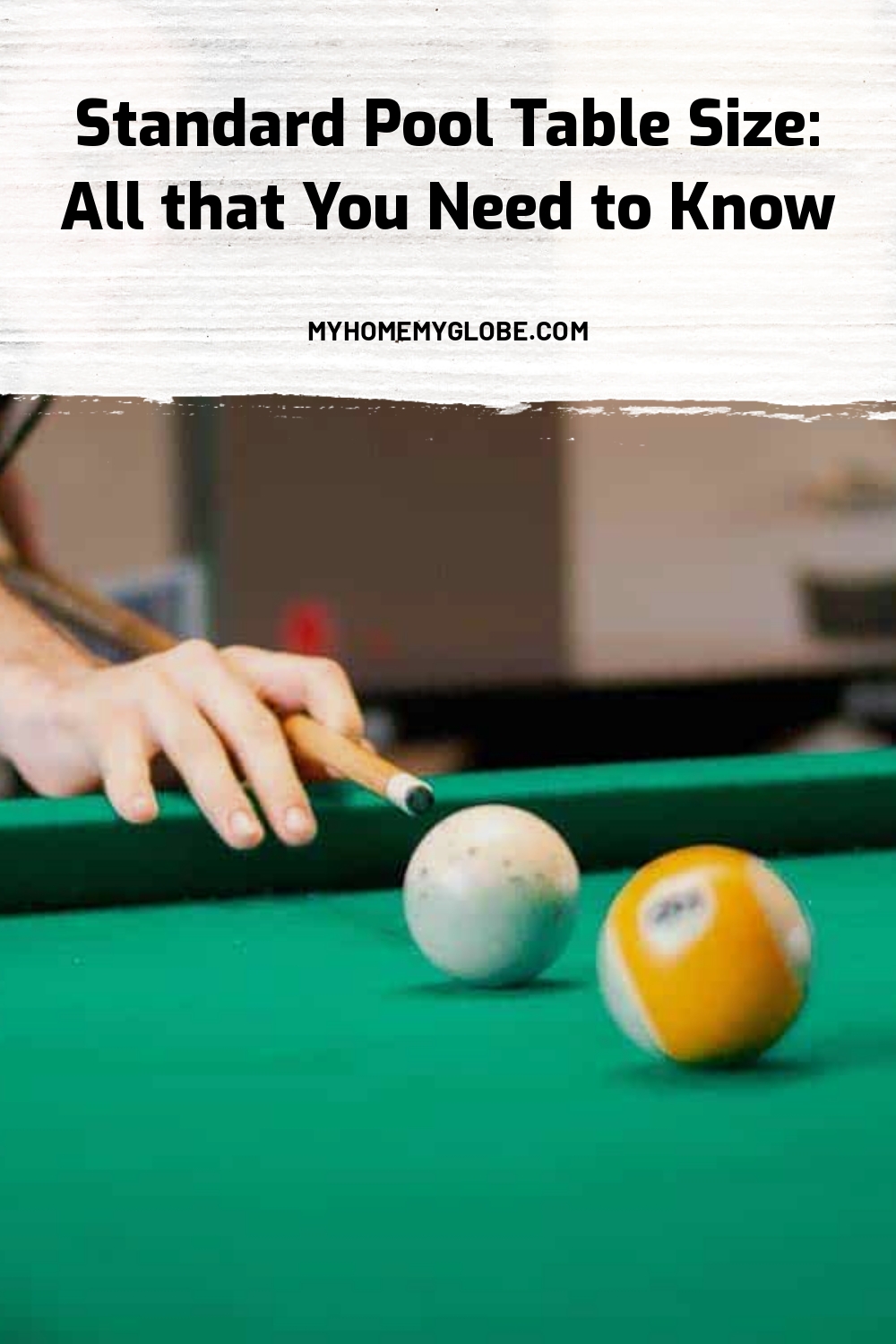