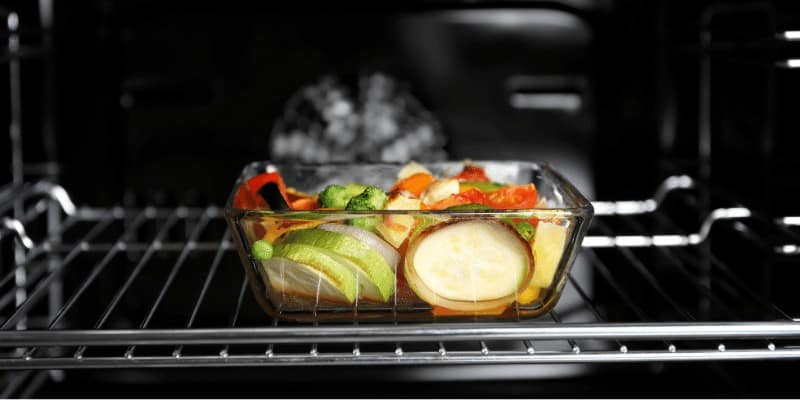 Glass cookware is all the rage these days and a lot of amazing baking can be done with glass in the oven.

But to make sure you get all the tasty food on a regular basis, you need to know how to handle glass in the oven so it’s not damaged or breaks.

Can You Put Glass In The Oven?

Yes, you can put glass in the oven.

For that matter, you can put anything you want in your oven as long as you do not turn your oven on (sorry for the lame joke).

As soon as you turn your oven on, well then the temperature starts to rise and it limits what you should be putting into your oven.

Basically, you only want food to bake or broil along with the containers to cook this food in the oven.

So what this question is really asking is if it safe to put glass in the hot oven or will the glass normally shatters and cracks when the temperature for cooking goes from room temperature up to 450 degrees Fahrenheit?

If you’re in a hurry and don’t want to go through this entire article, here is the gist – make sure you check the glass cookware you’re using is oven-safe and also check the safe upper limit of the temperature it can endure.

If you don’t know this, it’s best to not put the glass in the oven and check the details first.

A little something about Glass

First of all, understand that glass is made from sand and other particles. There are processes put in place and different types of sand and elements that are beyond the scope of this article. To put it succinctly glass is made by heating up sand (silicon dioxide mostly) to a very high temperature of over 3090 degrees Fahrenheit.

So putting glass in an oven like 450 degrees Fahrenheit is not a big deal. It is like the glass says “well been here done this before”. So again the answer is “Yes, you can put glass in an oven”.

However, there is a caveat to that statement. Will the glass become soft or even break at the typical oven temperatures of up to 450 degrees Fahrenheit?

If no, then what is the risk? If yes, then why since the oven even at 450 degrees Fahrenheit is not even close to the melting temperature of the glass.

Basically, it has the order of a solid and some liquid properties as well.

This puts the glass in a very unique category when it comes to solids and the things we use as material solids in our daily life. Given certain conditions, the glass will break.

When The Heat Is On

So now let’s look at what happens to glass in an oven. The oven is pre-heated to 425 degrees Fahrenheit.

You put the empty glass in the oven and it just gets hot and maybe a little more pliable (only at something over 900 degrees Fahrenheit). That is what will normally happen.

It is possibly a defect in the glass or the dramatic change in thermal vibration that could cause the glass to crack or break in the oven. It is not the 450 degrees Fahrenheit that will cause it to break or crack or shatter.

Glass Breaking Not Caused By Temperature

Let’s step back for a second here and look at how glass responds in everyday life.

If you take a glass shaped like a bottle, fill it with water, put a tight lid on it, and put it in the freezer what will happen? The glass will break not because of the temperature but because of the substance (water) expanding and breaking the glass.

So if you put a glass-type bowl in a preheated oven it will not break due to that activity alone. There would have to be another reason for it to break.

When you put glass in a pre-heated oven it should not even start to melt or become soft until over 900 degrees Fahrenheit.

It is the extreme thermal variations such as sudden and uneven temperature changes that could cause the glass to break.

This is true even of the borosilicate glass that is made specifically for oven use. We call it Pyrex or even-tempered glass although that was a brand name.

This type of glass is made by the low coefficient expansion of borosilicate. This glass is also tempered so that if it does shatter it will fragment into small little pieces instead of large shards of glass. It is tougher than regular glass.

So how can you get an extreme thermal variation by putting glass in an oven?

If the glass had food in it from a freezer and you put it into the oven, it may shatter as the freezing temperature of the glass is placed into a hot oven.

That would be an extreme thermal vibration. However, the oven is surrounded by heat in a somewhat uniform manner and is not likely to cause an extreme temperature change.

The other possibility would be if the glass was placed directly on the heat source. This does not happen in an oven but could if you placed it directly on an already hot burner on the range. That is an extreme heat variation.

The glass will also break or shatter if a stress point exceeds the strength of the glass itself. This occurs not normally in an oven but if an object hits it from one side.

A good example would be if we dropped the glass on the floor. The point of impact is a stress point change that was different than the stress on the rest of the glass.

Well, have you ever observed glass breaking, inside an oven or even outside an oven for no apparent good justifiable reasons?

This seems to have more to do with glass imperfections than with the heat of an oven or in the case of tempered windows defectiveness of the glass used in vehicles and buildings.

This could be poor edge quality from the manufacturing process or when the glass was cut and the edges had small nicks or chips. A small chip on a windshield could create a stress point variation and cause a crack to extend in length.

There are a number of reasons a glass could break or shatter but putting it in a uniform heated oven, all other variables excluded, is not one of them.

If you think about it, what about the glass on oven doors? Although not common, this glass has shattered but not for reasons of uniform heat. It normally was abused by the owner in creating a stress point, such as using the door to push back in an oven rack or when opened a heavy object dropped on it.

Even in these cases, it was not the high oven temperatures that caused the glass oven door to break.

Think even about the glass tops on modern ranges. Why do they not break from the heat? It is because the design does not allow for uneven temperature changes even on the range top.

What Do Glass Scientists Say?

So it should be settled and obvious that using glass intended for oven use is not a problem.

Of course, what makes glass crack or shatter is not a settled matter. Even Glass scientists in 2005 from around the world could not agree.

At the Third International Workshop on the Flow and Fracture of Glasses, there was much disagreement on the phenomenon. (https://phys.org/news/2005-11-glass.html).

Hard to believe that there was such a symposium, but hey, someone has to study this to make glass better for all of our lives. I think that they recently had their 7th symposium in 2017. Not sure if the disagreements were resolved.

So for those of you who were wondering if using glass for cooking in ovens is a good idea, the answer is that it will be okay to use glass cookware in your oven. This should be coupled with the purpose of any glass manufactured product.

A drinking tumbler made from glass is purposely not intended for making hot drinks in your oven. It is typically thinner than glass cookware and not tempered.

In addition, these drinking utensils are not necessarily manufactured with the same specifications as baking glassware.

This means that glass products used for non-baking may potentially have small microscopic nicks or defects that otherwise are not easily apparent or even matter for the intended use.

For example, do not use glass manufactured for windows as a cookie sheet for the oven. Although the glass properties are similar, the temper or purpose is not the same.

So use only glass cookware specifically manufactured for common everyday oven use and nothing more. This will minimize any occurrence of glass breaking due to a defect in the glass or thermal variations upon the glass. 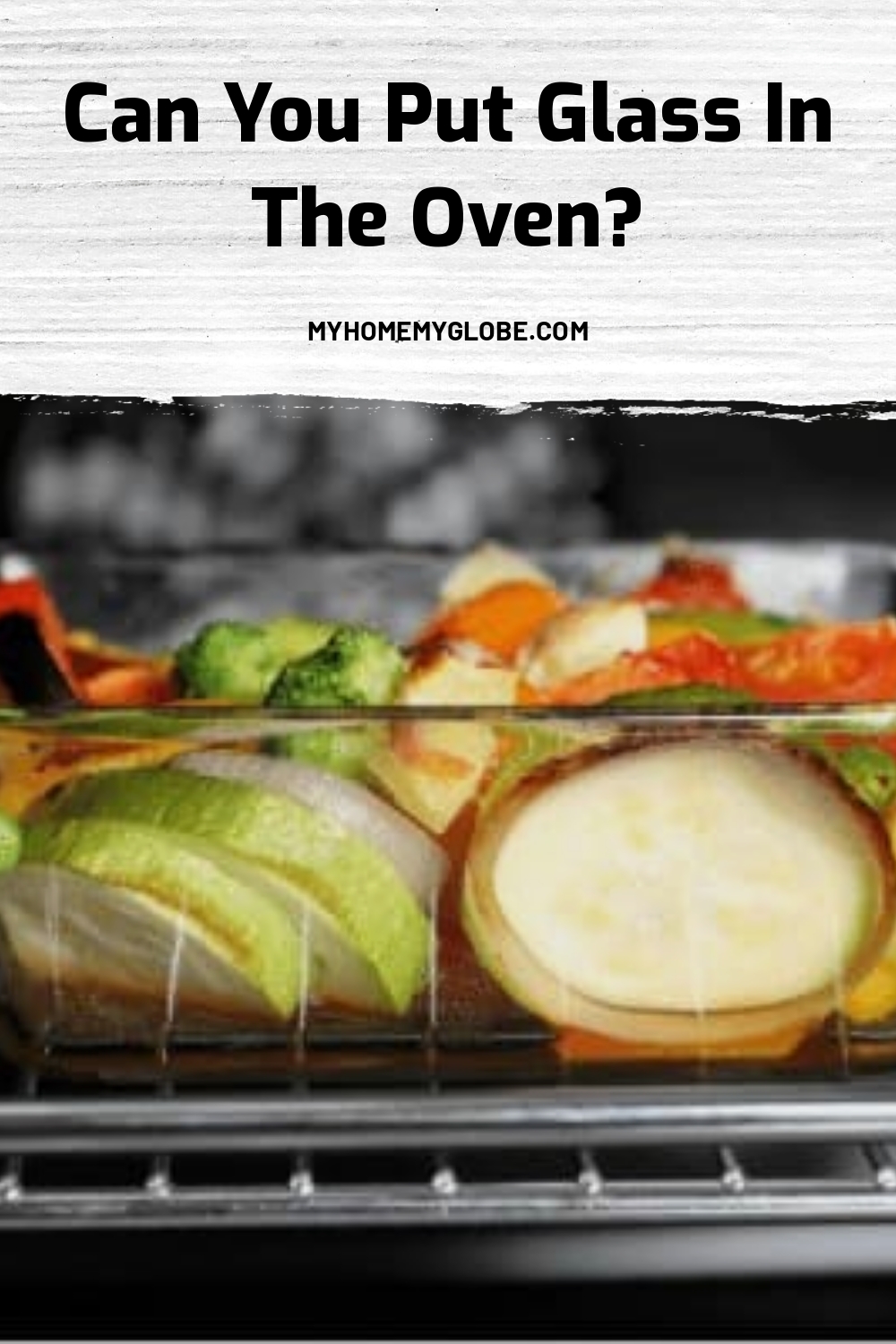