Many people want to eat fish because it is highly beneficial for them. But, at the same time, they are afraid of cooking it because of the smell it leaves behind in their kitchens.

Long after fish has been eaten and the dishes have been washed, the fish stench still lingers around.

This stench can even put off the most devoted and enthusiastic fish eaters. It definitely isn’t something that you want your guests to notice!

This article will discuss ways for you to get the fish smell out of your kitchen.

In addition to providing proper ventilation, you can use home remedies and light candles to make your kitchen smell better.

Why Does Fish Cause a Stench in the Kitchen?

According to a professor of Food Science at Cornell, fish starts to smell after it is caught, killed, and exposed to the air.

When the chemicals inside a fish’s body are exposed to the air, a process called carboxylation begins. Enzymes called amines are released during this process, and they are the root cause of the fish smell.

The longer you expose fish to the air or leave it out for too long, the more it will smell and stink up your entire home.

However, not all fish are equally smelly. The amine enzyme is most commonly found in the flesh of finfish, especially cold-water and surface-dwelling ocean fish.

Therefore, if you hate the smell of fish like most people, avoid buying ocean fish like haddock or cod. Opt for freshwater salmon or trout that do not stink as much.

You should be aware that no piece of uncooked fish should smell pungent. If you are overwhelmed by a rotten smell when you open the fish packaging, toss it in the trash immediately.

A repulsive odor means that the fish isn’t fresh and could be unsafe to eat. Most fish do not smell until you start preparing them, so keep this in mind as a general rule.

Want to eat fish without stinking up your kitchen? Here are six tried-and-tested ways to get rid of the fish smell from your kitchen as soon as you are done cooking:

Open All Doors and Windows

If the weather is pleasant outside, you should open all your windows and doors to let the fish smell escape your kitchen. This will also allow fresh air to make its way inside.

When cooking fish, crack your windows if possible, even if it is raining outside. Even a few cracks will ventilate your kitchen and help the air circulate better.

The sooner you open the windows and doors, the better. We suggest you keep them closed while cooking, so the smell does not spread to other parts of the house.

However, it would help if you opened them as soon as you are done cooking and leave them open for as long as possible.

Turn On All Fans

Another thing you can do to get rid of the fish smell and ventilate is turn on ceiling fans. If you don’t have ceiling fans, any fans in your kitchen will do. They can help air circulate thoroughly and quickly.

The sooner you get the fans going in your kitchen, the more effective they will be in removing the fish stink. Open them before, during, and after cooking, so the smell escapes from your kitchen instantly.

Get Rid of the Smell Source ASAP

We cannot stress this enough! As soon as you are done enjoying your meal, you should immediately get rid of all the smell sources and clean your surfaces with a mixture of vinegar and lemon juice.

We suggest tightly wrapping and refrigerating any leftovers. Wash the dishes and utensils you used for cooking and serving. Take out the trash if it’s filled with fish carcasses.

Getting rid of the odor source and cleaning up your kitchen as quickly as possible will reduce the fish smell significantly.

Scented candles do an excellent job of masking a fishy fragrance such as the one coming from your kitchen. Just one candle burning can give off a pleasant smell that will linger around for a long time.

Our personal favorites are lemon and peppermint scented candles. These work especially well to combat food smells in the kitchen.

Go ahead and light up a candle in your kitchen before you start cooking. Let it burn during and after your meal and kitchen clean-up time. We recommend you let it burn for up to 3 hours for maximum effect.

In this section, we will discuss some methods that you can employ after you are finished cooking. However, the sooner you employ them, the more effective they will be.

Simmering a pot of some very specific kitchen ingredients on the stove can mask the fish smell in your kitchen. Following are the three most common combinations that have proved successful:

Lemons and Other Citrus Fruits

Cut up several lemons and place the pieces in a pan of water. Allow them to simmer on the stove. If your recipe includes lemon or lemon juice, use the discarded lemon peels for this purpose.

It is not necessary to use lemons. If you have eaten a grapefruit or an orange that day, utilize the peels. Simmer them in a pot and let them work their magic!

Pour a decent amount of vinegar into a saucepan and place it on the stove. Warm up the vinegar and allow it to simmer on low heat for a few hours.

You can also leave a bowl of white vinegar on your countertop overnight. This will absorb the stubborn fish smell from your kitchen.

You can also simmer a pot of water with a few cinnamon sticks on the stove to get rid of the fish smell from your kitchen.

Throw in some other great-smelling spices in the pot along with the cinnamon sticks, such as fresh rosemary or ground cloves. This will provide extra effectiveness!

If nothing else works, try this bleach hack:

Leave an open cup of bleach on your kitchen countertop before you start cooking. This will counteract all kinds of cooking odors.

We recommend that you leave it out after you are finished for a few hours.

However, be sure to keep the cup full of bleach away from any food to avoid contamination.

Preventing Fish Smells in the Future

So far, you’ve learned how to get rid of the fish smell from your kitchen.

But there are also some things you can do to prevent your kitchen from smelling every time you cook fish:

Most of the time, the smell that arises during the fish cooking process arises because of the cooking method you use. Getting rid of fish smells starts by changing the way you’re cooking your fish.

The cooking techniques that cause massive odor issues are sautéing, frying, and pan roasting. These techniques release more fat particles into the air and spread foul smells.

However, baking, cooking fish in foil, or cooking it in a closed-lid pan can prevent all kinds of foul smells.

You can also try steaming, braising, and poaching the next time you cook fish to prevent the spread of foul fish in your kitchen.

Here’s a quick fish cooking hack for you:

Before you cook fish, rinse it while raw in cold water. This will remove odor-causing bacteria. Then, cook the fish in an acid like lemon or vinegar, which will help in reducing the smell.

Buy the Right Type of Fish

As discussed earlier, the type of fish you cook also makes a huge difference in smell.

If you do not have a fish preference but are highly concerned about the smell, do your research!

Steer clear of oily fish like sardines, bluefish, and mackerel as they have stronger cooking smells.

Opt for leaner fish such as flounder, hake, snapper, tilapia, turbot, and sole. They have milder smells.

Last but not least, you must buy the freshest and the best-handled fish that you can.

If you are new to buying fish, we recommend conducting research and finding a fishmonger that you can trust. Ask them questions about the fish before you purchase.

Remember that fresh, raw fish will always smell sweet and salty. Only poorly handled or old fish will smell bad and stink up your kitchen.

You must prepare your kitchen ahead of fish cooking time. Shut any inside doors to keep the smell from spreading but open up kitchen windows and doors to allow ventilation.

Ensure that you take out any trash that contains fish pieces and bits and wipe any spills as soon as you can.

Simmer smell killer mixtures on stoves to extract the foul smell or use our bleach hack.

If all else fails, go ahead and bake some chunky cookies for dessert. The sweet scent of cookies will make everyone forget about the fishy odor in your kitchen! 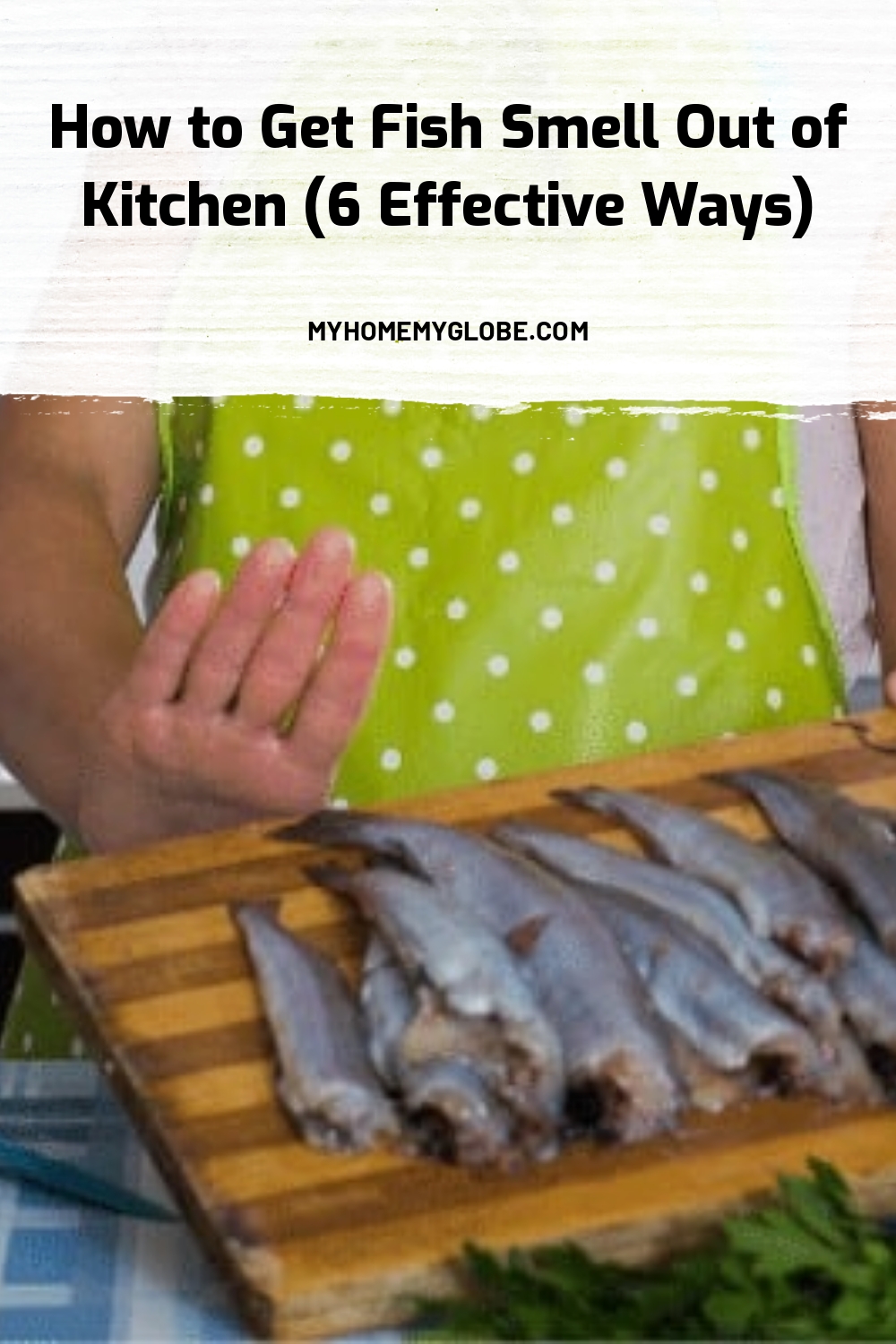