With the rising energy costs around the world, it’s absolutely justified if you want to get ahead of your electricity bills.

If you want to keep your electricity bills in control, you need to keep a check on the amount of power you’re consuming every day, and cut down on consumption wherever and whenever you can.

If you know how many kWh a one-bedroom apartment uses, you can tell if you’re in line with the average power consumption or over-consuming electricity.

The average power consumption of a one-bedroom apartment is about 900 kWh per month which means around 20 to 30 kWh per day.

However, the average power consumption of a one-bedroom apartment varies with various factors.

While the users of a single-bedroom apartment usually use about 900 kWh power every month, the figure can be higher or lower depending on a number of factors.

What Factors Affect the Power Consumption of a One-Bedroom Apartment

The power consumption of a one-bedroom apartment depends on the following factors:

Number of Electric Appliances You Use

A one-bedroom apartment with only a few electric appliances installed will use less power compared to the one with multiple electronic appliances in use.

For example, you’ll consume more power if you’ve got an electric stove as compared to the kWh power you’ll use if you had a gas stove.

Similarly, if you iron your clothes at home, your power consumption will be higher than the power that you’d consume if you get your clothes ironed by the dry cleaner.

Size of the Apartment

Another factor that will affect the power consumption in a one-bedroom apartment is the size of the apartment.

The bigger the apartment, the more lights you’ll need, and the more load the heating and cooling systems will have to bear.

While both the 750 square foot and 1000 square foot apartments have got one bedroom, the number of power units used is drastically different.

The Efficiency of Heating and Cooling System

Another important factor that affects the power consumption of a one-bedroom apartment, which many homeowners often overlook, is the efficiency of their heating and cooling systems.

If your apartment’s heating and cooling system is working at its full efficiency, the system will consume less power.

In contrast, if the efficiency of the heating and cooling system is compromised, the system will consume a lot more power than it should.

How Old Are Your Windows

The age of your windows also directly impacts the number of kWh that a one-bedroom apartment will use.

If you’ve got new energy-efficient windows installed in your home, your home will retain heat better in winter, and absorb less heat in the summer.

This means your home’s interior temperature will be pretty much regulated, and the load on the heating and cooling system will be fairly reduced. With that, the power consumption will also be reduced.

You can never quote a definitive figure of how many kWh a one-bedroom apartment will use because many factors are in play here.

However, you can estimate how much power your one-bedroom apartment will use based on the previous history.

If you’ve recently shifted to a new apartment, comparing your new apartment with your old (in size and number of appliances) can give you an idea of what to expect in regards to the power consumption.

Which Appliances Consume the Most Power?

Some electronic appliances consume more power than others.

If you knew which appliances used more power, you could practice caution in their usage and keep your power consumption well in check.

Some of the highest power-consuming appliances are:

The power consumption of the central air conditioning unit makes up the major portion of your total energy consumption.

A 2-ton central air conditioning system consumes as much as 1450kWh of power every month!

If you think your apartment isn’t too big and it can do with a smaller air conditioning system, it would be best if you replaced it. A smaller unit will consume less power.

A dryer is a staple in most households. However, did you know it consumes a lot of power? A dryer uses approximately 75kWh per month.

While 75kWh may not seem like a big number, all the smaller numbers add up to give you a major setback in the form of a very high electricity bill.

We simply can’t live without a refrigerator, can we? It’s where we store the leftover food, milk, vegetables, and fruits.

Did you know the refrigerator was among the most power-consuming electronics? It uses about 205kWh per month.

A water heater for an average household with 4 persons uses approximately 310kWh per month. Since we’re talking about a one-bedroom apartment, the heater usage will be comparatively less.

The power consumption of a smaller water heater will be lower than 310kWh per month, but it still makes up a major chunk of your monthly electricity bill.

Other high-power appliances include the microwave, iron, etc.

How to Control the Power Consumption in One Bedroom Apartment?

We’ve listed some tips below to help you cut down the energy consumption and keep your electricity bills at a minimum.

Investing in energy-efficient windows is one of the best ways to reduce the number of power units consumed each month.

This may seem like a massive financial burden right now, but it’s well worth it in the long run.

As we’ve said above, your air conditioning system uses the most power and makes up the biggest chunk of your electricity bill.

If you could reduce the number of power units your air conditioner consumes, you can bring your overall electricity bill much lower.

And energy-efficient windows can help you here. These windows offer excellent insulation. They reduce the amount of heat the windows absorb during the hottest days.

The load on the air conditioning system will be reduced, and so will the power consumption.

Get Your Appliances Inspected Regularly

The appliances whose efficiency is compromised consume more power than those that are in perfect working order.

One way to reduce the monthly kWh consumption is to get all your electronic appliances inspected by professionals regularly to ensure they are all in the best condition.

When the appliances are working just right, they’ll use less power, and you’ll be able to contain your electricity bill efficiently.

Unplug Devices and Appliances When Not in Use

Another effective way to reduce the monthly power consumption is to unplug devices when they aren’t in use.

For example, not many people unplug their televisions after they’re done watching. They simply turn it off with the remote.

While you may assume the television isn’t using any power when it’s turned off, it actually is! Do you see a small red light on the side? That shows that it’s using power. The same is the case with your mobile charger.

The best practice is to unplug the devices and appliances that aren’t in use.

Seal Any Cracks in the Walls or Gaps in the Windows

If your apartment is quite old, there may be gaps in the windows and cracks or holes in the walls. Sealing any cracks or gaps is one way to keep your monthly power consumption in check.

These cracks and gaps affect the insulation of your apartment. Heat enters your home through these openings in the summer and puts a load on your cooling system.

Cold winter winds may enter your home through these openings during the winters and overload the heating system.

This will eventually result in your heating and cooling systems using more power than they should.

Use the Lights of Rooms You’re Using

Leaving the lights of the entire apartment turned on when you’re working in the kitchen or reading in the bedroom isn’t the best practice.

If you want to reduce the monthly power consumption, try to use the lights of the part of your apartment that you’re using.

Although it won’t make much difference, even a small difference matters!

If your one-bedroom apartment has only got the basic appliances installed, it’ll use about 20 to 30 kWh per month on average.

However, this figure can be higher or lower depending on the size of your apartment, the number and condition of your electronic appliances, and the extent of usage of appliances on a day to day basis. 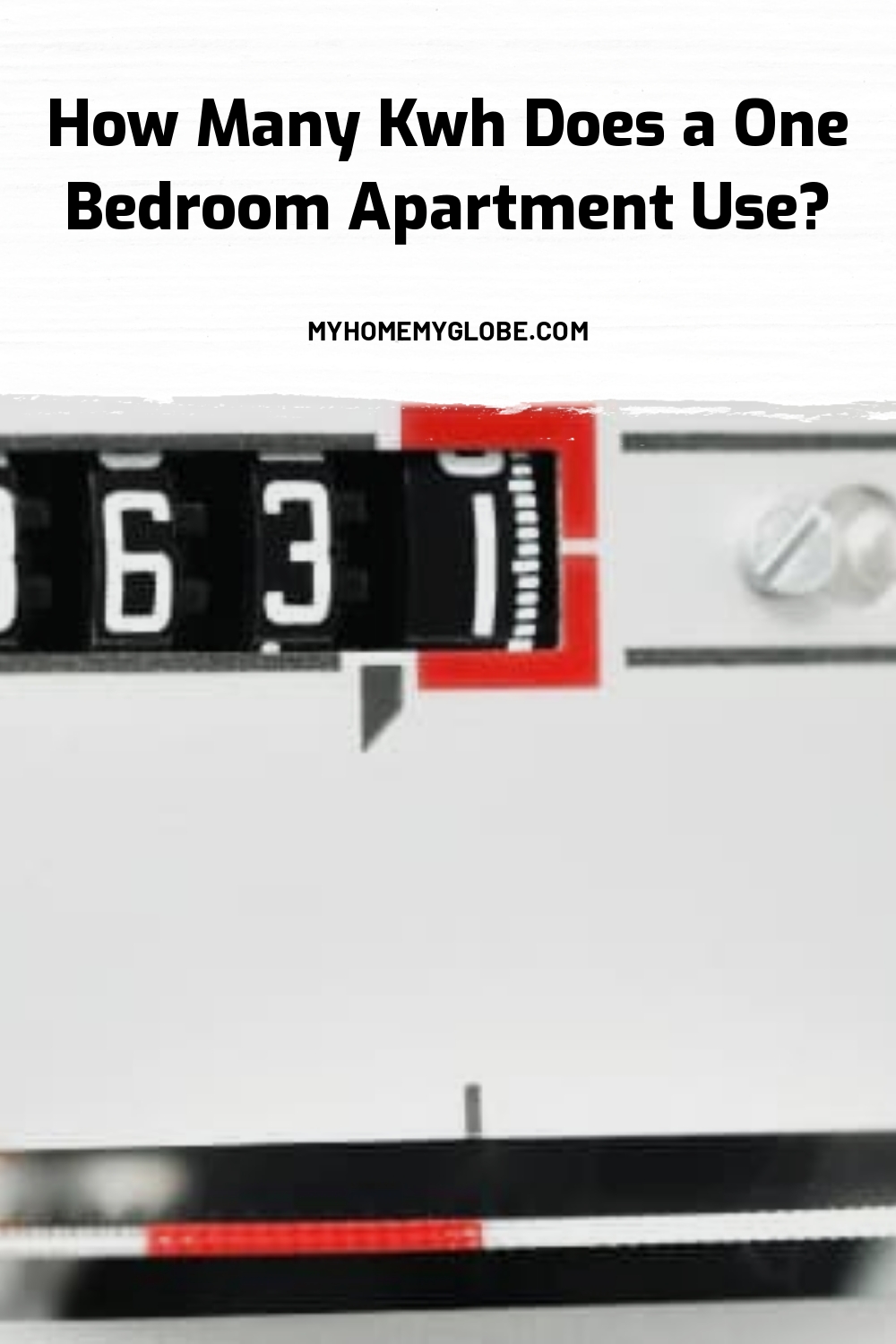