It’s not uncommon for people to hotbox their bathrooms to avoid the strong stench associated with the practice.

Common terms for hotboxing in the shower are “Hawaiian hotbox” or “Jamaican hotbox.”

Many hotboxers believe that hotboxing cannabis is an experience like no other; there’s no substitute.

It’s easy to get high quickly and effortlessly by smoking marijuana in a tiny, contained area, such as a bathroom. However, when done incorrectly, it may be quite harmful.

The term “hotboxing” refers to the phenomenon of a group of people smoking together in an enclosed environment.

The most common way of doing this is hotboxing a restroom, a car, or even a tent if you’re camping with pals.

Smoke builds up in the enclosed area since there is no way for it to be ventilated.

According to a hypothesis, inhaling secondhand smoke while also inhaling your weed smoke increases everyone’s high. As a result, everyone may feel the high, even if they aren’t smoking directly.

How to Hotbox Your Bathroom?

This is by far the most innovative approach for hotboxing. Using this technique, you can hotbox the bathroom without anybody in your house knowing about it.

Carry two towels with you and enter your bathroom. You may accomplish this by rolling up a towel and stowing it in a little gap under your door. Turn up the heat and the volume in your shower.

Wait for the steam to fill the room. Once the room has warmed up, it’s time to light a cigarette.

You’ll want to sit down to get the best results since you will concentrate the steam on the ceiling.

The scent of your marijuana will be masked by the condensed steam and the smoke from your joint. Make sure to let the steam out of your restroom once you’ve finished smoking.

Make the most of your occasion to get a real shower if you’re attempting to keep things under wraps.

As a result, it will appear as though you had just had a shower and not been smoking a large joint in the family bathroom.

Make sure that all the smoke and steam are expelled from the room. Before opening the door, spritz your bathroom with a deodorizer.

Hotboxing: Does It Make People High?

A study by Johns Hopkins examined the effects of marijuana use in confined spaces in two different scenarios. While the first scenario was fully sealed off, the second was well-ventilated.

There were six smokers and six nonsmokers in each environment. Smokers smoked ten joints in ventilated and enclosed areas in one hour.

Nonsmokers reported feeling euphoric in the first section, where there was no ventilation.

Participants in the trial who did not smoke had measurable quantities of THC in their urine and blood, but nonsmokers in the ventilated environment did not have any detectable levels of THC.

So, did the smokers get a boost from hotboxing as well? In a strict sense, no. Cannabinoid levels differed between individuals who smoked in a confined environment and those who did not.

The fact that THC levels in one research were unaffected by hotboxing doesn’t indicate that you won’t feel euphoric. The oxygen and carbon dioxide levels in the brain are to blame.

Inhaling marijuana smoke deprives the brain of oxygen and causes abnormally high amounts of carbon dioxide. This enhances the overall impression of euphoria.

You’ll also notice a burst of oxygen when you take a breath of clean air after departing your hotboxing environment.

This has the effect of making you dizzy, as though the effects of the drug are being amplified. The first step in hotboxing properly and securely is to understand what you’re getting yourself into.

Why Do People Hotbox?

Each cannabis enthusiast has their own unique set of reasons for hotboxing. Convenience is often cited as a reason when it comes to hotboxing.

This is the solution when the only place to smoke is a tiny, enclosed space, and smokers are concerned about the smoke spreading to other parts of the building.

For some, hotboxing is just for fun, while others are curious to see how much smoke can be generated from a single joint. Most of the time, though, individuals hotbox to attain a higher high.

Sitting in a cloud of cannabis smoke is the ideal way to absorb and inhale its smoke. According to some of the reasons outlined above, many wonder if hotboxing makes them high.

This has sparked a slew of theories about the truth of the case.

When to and When Not to Do Hotboxing?

Hotboxing doesn’t necessarily get you high. However, this does not imply that you cannot have fun with it.

Also, never forget to keep an eye out for those around you and be aware of your complete environment at all times.

No one can deny that cannabis has an overpowering aroma that can affect other people’s health around you due to its smoke.

On the other hand, hotboxing has a unique ability to keep the smoke in a certain area or space for a long time.

You should not conduct the activity in rooms or circumstances where the neighbor dislikes the conduct. Oxygen is your buddy, so use it carefully to avoid asphyxia and other dangers that might arise while hotboxing.

Hotboxing is more popular in the restroom than anywhere else. But researchers have found that cannabis smokers lack the knowledge to use a hotbox in their restroom.

Do you know how to use the bathroom hotbox? As we provide more information, we encourage you to keep reading.

Hotboxing: A Few Pointers to Keep in Mind

Smoking in a hotbox may cause a lot of pleasure. Because it has no negative side effects, regular cannabis smoking is a popular pastime.

It’s also the riskiest way to smoke with your buddies since you might get caught if detected. It’s important to keep in mind where you are at all times.

Keep the area secluded so that the smell and loudness of cannabis do not become a big distraction. Avoid areas where you believe you have a good probability of being caught.

Remind yourself that the strong fragrance of whatever you bring into the session, such as cloth, will mean others can quickly tell what you’ve done. Hotboxing in a car increases the risk of being caught.

Therefore, it’s important to avoid it. In addition, it is quite likely that your driver will be under the influence of the smoke. Therefore, make sure you don’t go overboard.

Keep an eye on your buddies to ensure they’re having a good time.

It’s not a good idea to try hotboxing for the first time right after you quit smoking pot. Having all the essentials will ensure that everyone has a good time throughout the session.

How Do You Smoke in a Hotel Bathroom?

Before you light up, head to the bathroom and cover the bottom of your door with your hand as you did with the front door.

Smokers will no longer pollute the bathroom walls since the tar and stink from combustion smoke will adhere to the steam instead.

The Right Way to Hotbox During a Shower

You may accomplish this by rolling up a towel and stowing it in a little gap under your door. Turn up the heat and the volume in your shower.

Wait for the steam to fill the room. Once the room has warmed up, it’s time to light a cigarette.

It Is Not Recommended for People with Respiratory Problems Should Hotbox

A hotbox session is not recommended for anyone with respiratory problems or asthma.

Asthma patients and others with upper respiratory issues would undoubtedly be adversely affected by a smoke-filled atmosphere.

As a result, if you are concerned about your health, you should avoid hot boxing. As we are not medical specialists, we advise you to seek a second opinion from a doctor.

Why Does It Smell So Bad When I Smoke in the Bathroom?

The secret to smoking in the bathroom without making it smell bad is to use air purifiers. Using an air purifier is a great technique to combat the indoor smoking smell.

You can open a door or a window if possible. Close all of the air vents in your home. You need to close the door and place a damp towel on it. Keep your hair up and your clothes to a minimum.

Is It Possible to Use a Towel as a Door Stop?

Using a towel on a door can effectively muffle noise at a low cost.

Towels may serve as both a bathroom need and a sound dampener, sealing the space between your floor and the door while not in use.

Hotboxing in your bathroom is popular for cannabis users, and it’s worth giving it a shot. In areas like the restroom, cannabis users can enjoy hotboxing for several reasons outlined in this article.

Although hot boxing may appear simple, there are several considerations for safety and hygiene reasons. 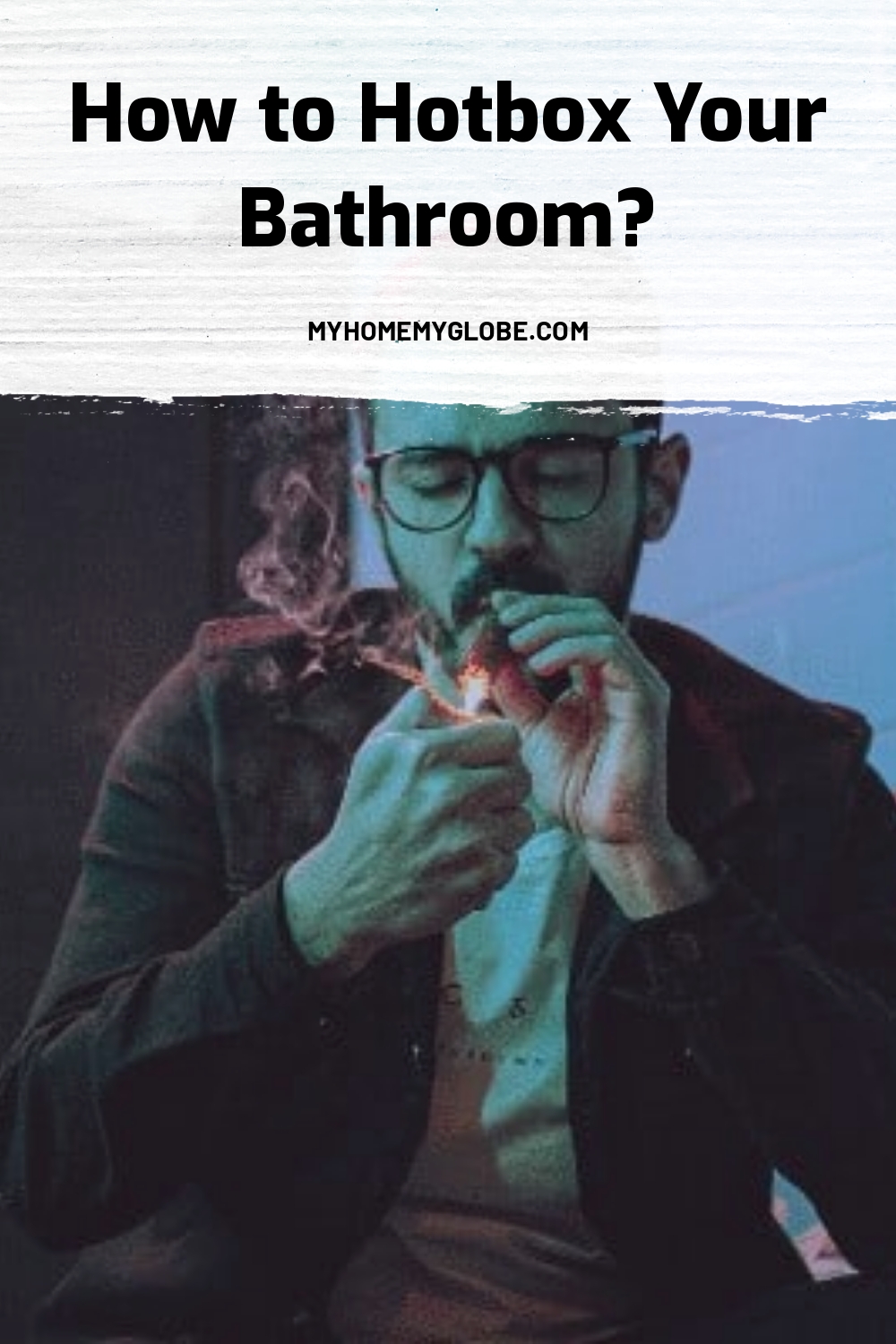