No worries! We can help you fix this issue with some very simple tips and techniques.

If you’re looking for ways to quiet your bathroom fan down, then keep reading!

Clean the entire Fan Inside Out

One of the major causes of fans making noise is the accumulation of dirt and debris over years of operation.

Before you rush to replace your noise-making fan, make sure you have tried cleaning it thoroughly.

The first step in cleaning the bathroom fan thoroughly is to remove the fan cover. Once you remove it, you’ll be able to reach the fan blades and clean them out properly.

Take a rag or a cleaning cloth and submerge it into a cleaning solution. Then, use the wet cloth to clean the fan blades thoroughly.

Make sure you also clean the fan housing, motor assembly, and the rest of the unit that makes up the fan.

Then, let all the parts dry before putting the cover back on.

After you have assembled it again, turn on the fan and see if the noise problem is solved. If not, then the problem may not be the dirt.

In that case, try the other methods that we discuss below.

Use a Sorbothane Rubber to Absorb Sound

If you cleaned your fan and it still didn’t make your bathroom fan quieter, then we recommend working on absorbing and reducing the sound.

This can be done by using a Sorbothane rubber.

A Sorbothane rubber is made of soft sheets of rubber that are easily attached to the bathroom fan with the help of a backing adhesive to absorb the sound and vibrations.

First, you’ll have to cut the rubber sheet into strips that are 1.5 or 2 inches wide. Then use an adhesive to attach the strip around your fan.

Make sure the strip is aligned to the wall or ceiling that is against the fan. This way, the vibration caused by the sound waves clashing the wall will reduce and be absorbed.

Additionally, you can also attach these strips to the fan motor assembly and the electrical access plate to absorb more of the sound vibrations that contribute to noise.

Noise is also caused by ducts that have several hard turns or kinks on the exterior vent. This puts extra pressure on it, and as a result, it creates loud noises.

If that’s the case, then you might be thinking about replacing your duct. However, there’s no real need to do that when fixing the existing duct is a much easier possibility.

When you straighten out your ductwork, it will reduce the pressure caused by the air as well as the noise caused by its movement.

First, you need to go into the attic and look for the ductwork connected to your bathroom fan.

Next, follow this duct along its path to the exterior vent and identify all the hard turns on the way.

This change will reduce the pressure in the duct, and that will help quiet the noise caused by your bathroom fan.

Replace the Air Duct with a Larger Size

A good quality ultra-quiet fan usually has a 6-inch-long duct. All you have to do is replace your current duct with a 6-inch duct to reduce the noise in your bathroom fan.

If you’re going to install a larger duct on an old fan, then you’ll also have to get an enlarger coupling to help you connect the larger duct with the smaller fan outlet.

First, you need to go to your attic and see where the bathroom fan is located. Then, unhook the fan’s duct from its outlet and install the enlarger coupling on it.

Then, remove your existing duct from the fan’s exterior vent attached to the wall or roof. Then, enlarge the opening of the vent for the attachment of your new 6-inch vent.

This step can also benefit from getting the help of a professional. Make sure you run the new duct from the vent to the fan and keep it straight while doing so.

Lubricate the Blades and Motor

Another reason for a bathroom fan making noise is friction.

If the fan blades have developed rust or dried out completely due to years of use, then it will have much higher fiction.

The friction not only makes extremely unpleasant noise but also reduces your fan’s overall lifespan.

You can fix this issue by lubricating your fan blades and motor. First, you need to clean the entire fan thoroughly so there’s no dirt residue left.

Then, lubricate the fan blades around the bases with a good quality lubricant.

Please ensure that you get a good coating of the lubricant by applying it a few times, so it can reach all the friction-affected parts of the fan sufficiently.

If you’ve had your bathroom fan for a while, then there is a good chance that its mounted screws may have loosened.

As a result, the fan may start creating excessive vibrations and noise that makes the fan loud.

You can easily fix this issue with simple techniques based on the way your fan is installed.

If screws were used to install your fan into a joist, then you’ll be able to tighten them without having to go into your attic.

First, remove the cover of the fan, and identify the screws that connect the fan to the joists. Tighten these screws, and you’ll be all set.

In the case that your fan is installed to the ceiling joists using hangers, then head to your attic and look for your bathroom fan from there.

Start by tightening all of the screws that mount the fan to the hangers.

Move the fan gently to see if it’s loose. If yes, then tighten the mounted screws properly.

The fan motor isn’t designed to last forever, so it means that at some point, you will have to replace it.

If the fan motor is worn out and not replaced timely, it will start making loud noises.

If your motor starts acting like that, it doesn’t necessarily mean that you need to change the entire fan.

You can also just replace its motor and reduce the cost. It is also more convenient to replace a fan motor than mount an entirely new bathroom fan assembly.

Sometimes there’s no way to save a malfunctioning fan, no matter how many maintenance procedures you perform.

A fan does, after all, have a finite life span that they live out. If your bathroom fan is very old and has been causing problems for a while, then there’s a good chance that it has run its course.

Maybe it’s time to replace your fan entirely and start fresh. It will take care of the problem in the long term.

You can do this by removing the mounting screws that connect your fan to the joist and remove the old fan.

Make sure you check the size of the existing hole, so you can get a new fan of the same size or get it enlarged for a bigger fan.

Make sure you get a good quality fan with built-in noise-canceling properties or ultra-quiet features.

No one wants a loud, obnoxious piece of machinery in their home, especially if it’s a bathroom fan that needs to be used frequently.

If your fan has been causing noise for some time, you must take action to try and quiet the bathroom fan.

If the problem is small, then it can be fixed with all the different techniques that we mentioned above.

Sometimes it’s as small as a dirt issue, but there could also be a major issue that can’t be solved and needs replacing.

You can also seek the advice of a professional, and they’ll help you fix the issue. 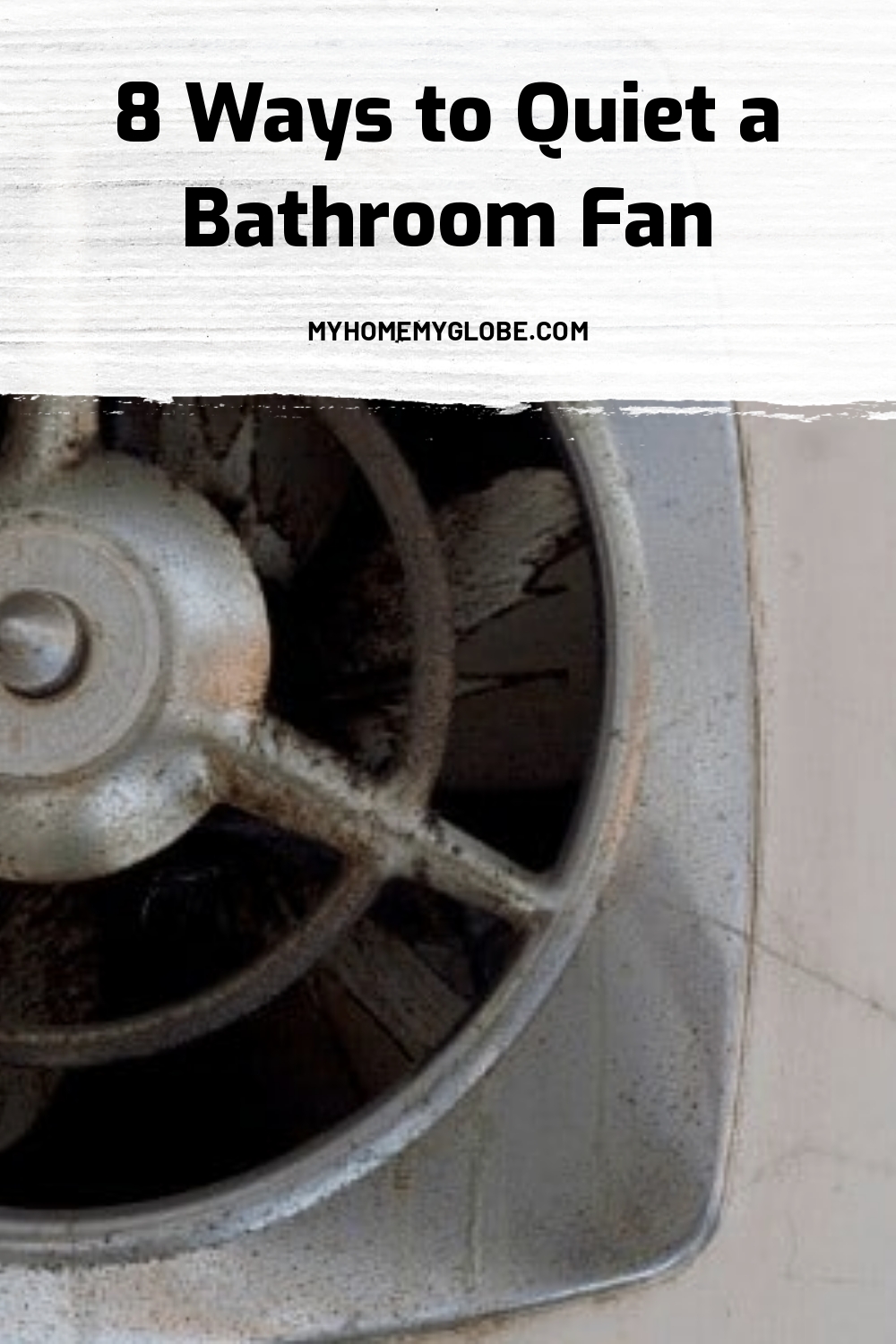