A dull knife can be challenging and quite dangerous to use. It’s why you should sharpen your knives. However, you might experience a moment in life when you don’t have a sharpener.

Whether you’re on a road trip, out in the wilderness, or in your kitchen, you can sharpen your dull knife with household items.

These include a ceramic cup, another knife, leather belt, nail file, etc.

Let’s explore how you can use these other items to sharpen a knife!

9 Ways to Sharpen a Knife Without a Sharpener

Here are nine ways to sharpen a knife when you don’t have a knife sharpener or stone at home:

You can sharpen your knife with a coffee mug. Get your hands on your porcelain mug, turn it upside down, use the raw or rough part of the cup or mug and run your kitchen knife across it.

Ensure the mug surface is rough, as this trick won’t work on a smooth surface. Put the blade at a 20-25 degree angle on the rough surface.

Stroke the full length of the blade on the mug. Flip the knife over and repeat the process on the opposite side of the blade.

That part of the mug will discolor, indicating the ceramic is sharpening the blade. If you don’t have a mug, you can use a ceramic plate or bowl as a homemade sharpening stone.

If you don’t have a ceramic mug at home, you can use a ceramic bowl, plate, etc. Most ceramic items can work as a homemade sharpening stones.

Pro Tip: If the upside-down mug is too slippery on the surface, put a chopping board or cloth underneath it to keep it from slipping.

You can also use a nail file to sharpen kitchen knives. You will most likely find it lying around in your home. Its rough texture works well for sharpening a kitchen knife.

Since a nail file is small and lightweight, you can keep it on you when camping or hiking outdoor to sharpen your pocket knife as well.

Once you get your hands on it, put it on a flat and steady surface with the rough side up. Grab your kitchen or pocket knife with its blade directed away from you.

Put the edge of the knife at a 10-degree angle on the rough side of the file. Stroke it down the whole length of the file while covering the entire blade length.

Use an old, rough leather belt to sharpen your kitchen knife. It will help in stropping the knife, which is technically not the same as sharpening it, but it does realign the blade and polishes its edges.

Make sure the belt you choose does not have any stitching. The belt will eliminate the burr created after refining the metal.

If you have a sharp knife, a leather belt will enable you to retain its sharpness.

Lay the belt on a hard, flat surface so that it can hold in place. Put the face of the knife blade toward you.

Angle the blade at 10 degrees and keep the belt at the same angle. Drag the knife blade along the belt and make sure to cover the blade’s full length in one swipe.

Flip your knife over and run its opposite side along the leather belt. Continue to sharpen the knife for about 10 minutes or until you feel that it is getting sharper.

Work both sides evenly and at the same angle for optimal results.

You might not use sandpaper regularly, but it’s certainly an item that is often lying around in most homes. It’s inexpensive and versatile, and you can use it to sharpen your knives.

Since sandpaper has a surface similar to a rough sharpening stone, it can effectively sharpen knives. Mount the sandpaper on the back of a flat wooden surface and fold it in half.

Grab your knife and put it at a 10-degree angle while directing it away from you. Stroke the knife into the paper and use your other hand to hold the paper in place.

Be careful not to hurt your hands with the knife. Cover the entire length of the blade with each stroke. Flip the knife over and start sharpening its opposite side.

Continue to sharpen the blade until you’re satisfied with its sharpness. Sharpen both sides equally to ensure the knife stays even.

If you’re on a road trip in your car and need to sharpen your knife, you can do so with your car window.

You might think it’s a smooth surface, but the edge is usually rough, round, and unpolished.

Before sharpening your knife, see if the window edge is rough enough to make a difference. Open the window halfway and run your fingers along its edge.

If it feels too smooth, it probably won’t work. However, you can try to sharpen the knife by putting it at a 10-degree angle, facing away from your body. Use a quick, smooth motion to stroke the knife.

Cover the blade’s full length with each stroke. Turn the knife over and sharpen its other side using the same method. Drag the knife back and forth. Repeat the process on both sides 8-10 times.

Make sure the knife is equally sharpened on both sides so that it cuts through evenly.

A sharpening object that you will easily find in your kitchen is another knife. You can use the blunt edge of one knife to hone the blade of the other knife.

You might have come across the words that sharpening a knife with another knife is not a smart move. However, if you do this carefully, you will not have anything to worry about.

The tip is never to use the blade of a knife to sharpen another blade as it will damage both knives. You should always use one knife’s back to sharpen the other knife.

Direct the knives away from you and make sure you’re using the blunt side of your sharpening knife.

Stroke the knife’s blade you need to sharpen along the back edge of the other knife.

Make sure you do so in rapid, repetitive motions. Keep it away from you to avoid injuring yourself.

Flip the blade you were sharpening over to sharpen the other side. Repeat the process until you’re satisfied.

A river stone is perhaps the closest thing you can find to sharpening stones. If you’re camping near a river and need to sharpen your knife, you can use a slate or river stone.

Just wet the river stone with water like you would with a whetstone. Put your knife’s blade at a 10-degree angle over the stone and keep the blade away from your body.

Use a quick motion to stroke the knife away from you. Make sure you cover the entire blade length. Flip the knife over to hone the other side of the blade using the same method.

Even though it might not be as effective at sharpening a knife, you can use cardboard to hone your blade. You must have cardboard boxes lying around the house.

Find a box and use its rough edge to run the blade along it.

Cover the entire length of the blade in one stroke. Repeat the process until you’re satisfied with the knife blade’s edge.

Flip the knife and repeat the quick motions at the same angle to ensure the results match on both sides.

You can find a shuffle in your garage. Use its top part, where you rest your foot, to sharpen the blade. If the shovel is made from durable material, such as stainless steel, you will find it easier to sharpen the knife.

Put your knife on the edge of the shuffle at an angle and run it along its edge in one quick motion. Make sure to cover the entire length of the blade. Repeat the process.

Flip the knife over to run the other side of the blade along the length of the shovel’s edge and sharpen it from both sides.

Even though a knife sharpener is the best tool to sharpen your kitchen knives, you might not always have it in your home or when you’re out camping.

When that happens, you can use the objects mentioned above to sharpen your knife. Make sure to cover both sides equally so that your knife cuts through things smoothly. 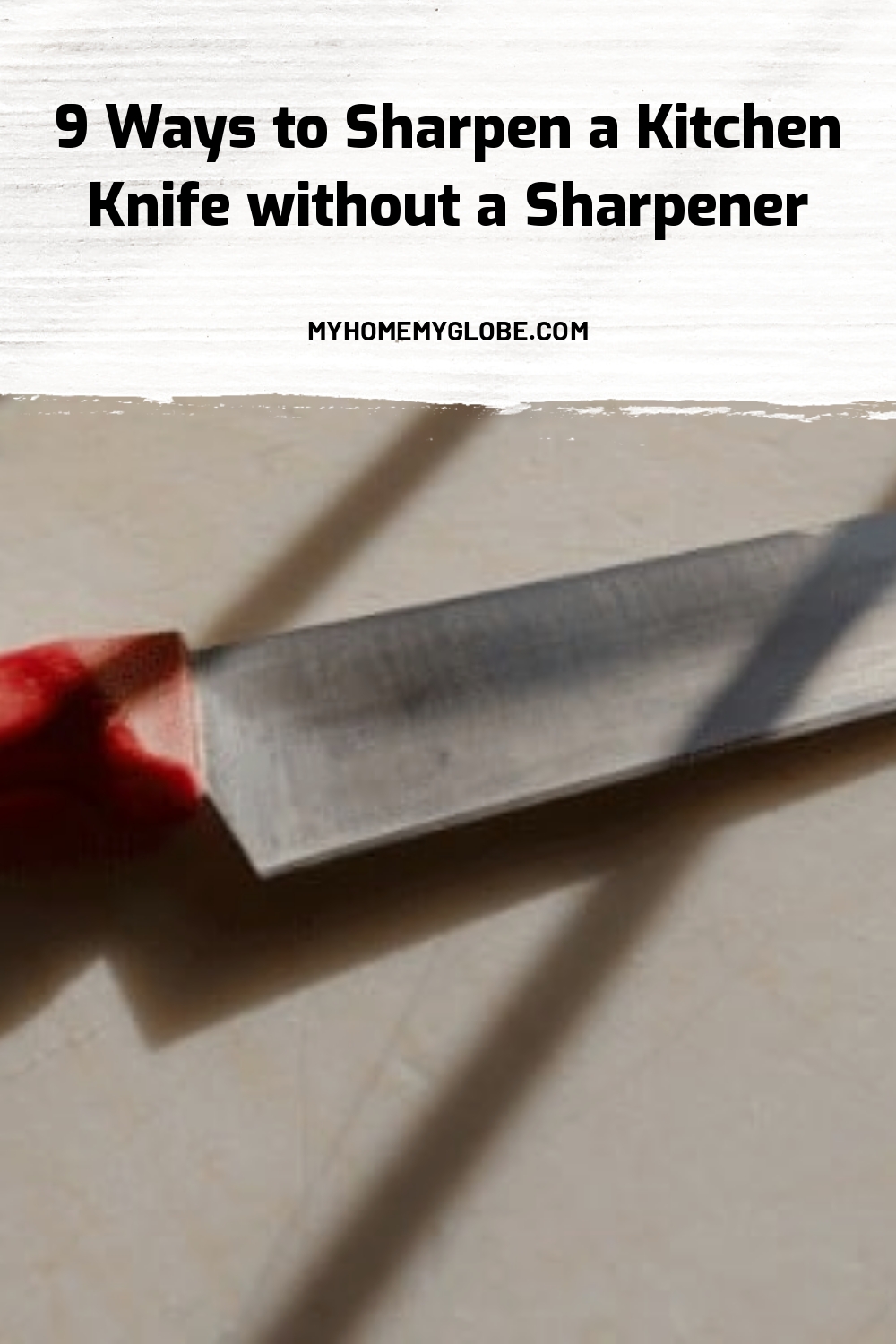